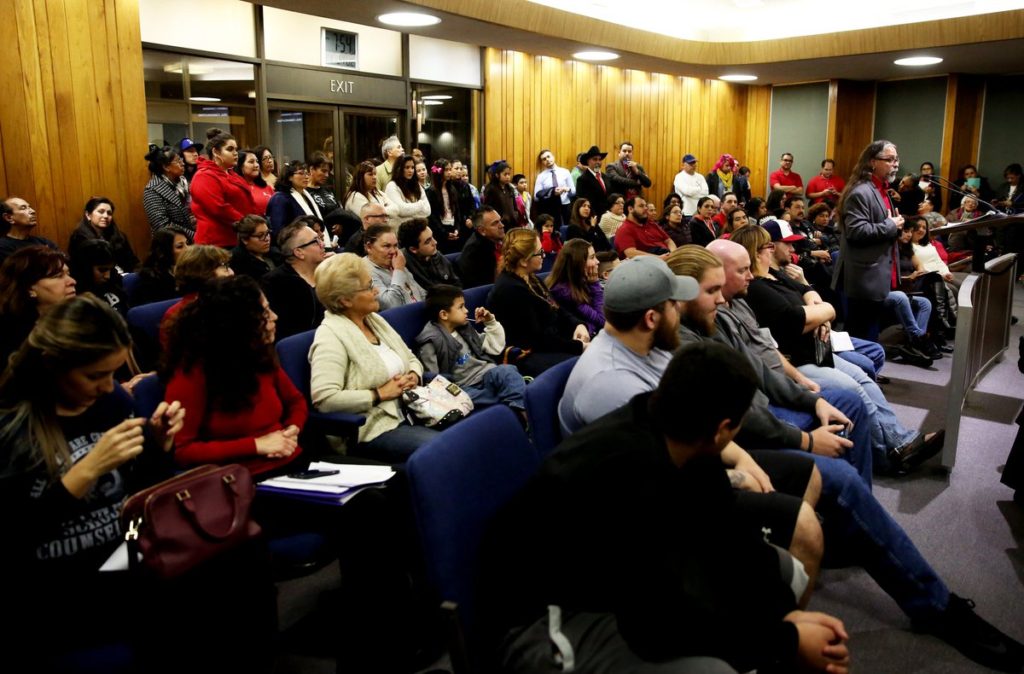 Residents and advocates filled the La Puente council chambers as city council members debated and voted on a sanctuary city resolution in La Puente, Calif. on Tuesday, Jan 10, 2017. The resolution will mandate the city not to enforce federal immigration laws and not investigate or apprehend residents in violation of immigration laws. (Photo by Trevor Stamp for SGVN)

LA PUENTE >> Amid calls from residents and local activists to support all minority groups, not just undocumented immigrants, the City Council unanimously voted to adopt a resolution declaring the city a sanctuary for immigrants, people of color, religious minorities, LGBTQ people and people with disabilities.

“Whether you are undocumented, whether or you are LGBTQ or Muslim or anything else that people want to put you down for, La Puente welcomes you,” said Workman High School teacher Billie Joe Wright, one of more than 20 people who voiced support for the resolution during the public comment portion of the council’s meeting.

The resolution, which was presented by Councilman Argudo and several residents, states that city officials will not enforce federal immigration laws or use city resources to apprehend people “whose only violation is or may be a civil violation of immigration law.” It was approved by the council in a 4-0 vote. Councilman Dan Holloway was absent from the meeting.

The resolution adopted by the council was one of two brought forward for consideration in the wake of the election of Donald Trump. The other resolution was aimed only at undocumented immigrants and was modeled after the sanctuary city resolution adopted in Cudahy.

Many who spoke in favor of what they said was a more inclusive resolution said Trump has made them, their family, friends or students fearful of being deported and that it was important for La Puente, which means ‘the bridge’ in Spanish, to reach out to all communities that were targeted by the President-elect during his campaign.

“Nobody should live in fear, nobody should have to be the brunt of harassment, of hostile attacks,” said Gilda Ochoa, a longtime resident and professor at Pomona College. “We should be a community that thrives together.”

Only two speakers raised concerns about the resolution, with one simply asking if La Puente should adopt the resolution given Trump’s proposal to defund sanctuary cities. West Covina resident Willis Somervell said there are immigration laws on the books that many in the country are breaking.

“The federal government, they have some responsibility to protect our borders,” Somervell said. “There is some concern that the borders have been somewhat porous and how secure are we.”

Although many speakers brought up Trump’s election as the reason for passing a resolution, saying it was important for the council to declare La Puente a sanctuary city before his inauguration next week, Argudo called on the community to recognize and respect his presidency.

“We need to stand behind him, but he also needs to hear our voice,” the councilman said, adding that they should not forget than millions of people have been deported under President Barack Obama’s administration. “This is not Donald Trump’s issue. This is an issue of the American people.”